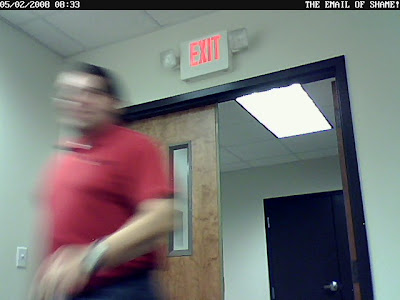 At work we have a LATE CAMERA. It is a web cam that sits near the front door. From 8:31 a.m. until 9:00 a.m. any motion triggers it to snap a picture with a time stamp and then e-mail that to everyone in the company.

My Lame Excuse: I forgot that I needed gas and left the house just in time to get to work. I only pumped 2 gallons but even that made me 3 minutes late. Doesn't everyone have a lame excuse for being late?
There is a problem when people are later than 9:00, but we can't extend the time because the productive people are going back out the door. Also, some folks have tried to sneak in the back door.
An issue that I struggle with is that some of the people who are habitually late, stay late and are the most productive (aka profitable) people. Others not. Some of my early people leave before quitting time.
As an employer, I'm not sure if I should look at tardiness as a personal discipline issue or rather allow people to play to their natural rhythms and work when they are most productive.
Your comments welcome. Are you a late person or early person? Why?
Posted by Ren at 8:35 AM 16 comments: